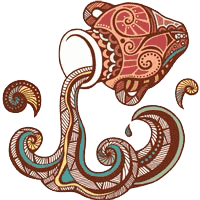 If you are an Aquarius, the world is your oyster in that it is dank, wet, cold and very unpleasant to look at. Aquarius is the sign of the water-bearer… one of only two zodiac signs to work for a living (the other being Libra, for the Bureau of Weights and Measures). You might be asking, “Why doesn’t Virgo get the water?” but, as we all know, Virgo looks out for Virgo. Besides, if Virgo was already a water-bearer, they’d have to come up with a new zodiac symbol for this span of dates; and, with the exception of dragons, snakes, peacocks, knights, millipedes, sharks and eagles, I can only think of a thousand or so other possibilities.

Aquarius is an “air sign” because people who carry water often breathe air. Actually, air signs are associated with using the mind and that is why Aquarius is an air sign. This is NOT complete and utter bullshit, although it might look like it upon a cursory or even extended review. A lot of serious thought went into deciding what pretend primal “element” should be associated with this pretend image that we’ve created in our minds from a bunch of random stars… perhaps more serious thought than you might think is appropriate.

You see, people born under the air signs are problem-solvers; whereas, people born under the other nine signs are just so… STUPID. I knew a Taurus once, who was going to buy a timeshare from some guy on Craig’s List and, right after he did, he remembered he’d left his two year old at the ball pit at IKEA. Sure the timeshare doubled in value inside of two years and his son was fine; however, he played handball on the weekends, like THAT’S intelligent. “Duh, me gonna do a sport where my equipment is my hand”. How I hate them!

Aquarii are most known for their creativity. I’m not talking macaroni-art creative. I’m talking indistinguishable from mental illness creative. I’m talking genius creative. Do you doubt me? Benny Hill was an Aquarius. Check and mate! While the rest of British television was stupidly inventing cutting edge comedy that would define the genre for two decades, Hill stepped back and envisioned a show comprised of bits stolen from dead silent film stars and boobies… lots and lots of boobies. Creativity isn’t just creating: It is knowing what to steal and from whom.

Another Aquarius was Ann Southern, who voiced the car in My Mother, the Car. After a moderately successful film career, she creatively warded off poverty and starvation by creatively accepting a role in one of the most banal series in television history. And, when I say “television history” I refer to all past, present and future television series. Frankly, it is the only television show that has ever inspired anyone to say, “This premise is idiotic. Let’s watch The Beverly Hillbillies…”.

The list of creative Aquarii is endless, especially if you include people yet to be born, fictional characters and dogs. Did I mention that Barbi Benton is an Aquarius? You may think that she was just another pretty face, but she was also creatively naked in front of a camera for money. You may not think that is creative, but Benny Hill would disagree and we’ve already decided that he’s creative or something. I could come up with creative Aquarii all day if no one tried to stop me, which they’d almost certainly do after the first four hours…

The constellation Aquarius is thirteen stars, each one representing one of the original thirteen colonies.  On first glance, it is obvious that this star grouping can be nothing else BUT a woman carrying water (or, if the orientation is changed, a woman lying on her side while holding a water jug). Originally, she represented the water bearer for the gods because, despite their powers, the Greek gods could NOT get their own water or even do a load of dishes once in a while. In fact, Hephaestus once ate his cereal out of an ashtray because no other clean dishes were available.

Aquarius is ruled by Uranus and whatever joke you are about to make, forget it.

Back to Zodiac Main Menu