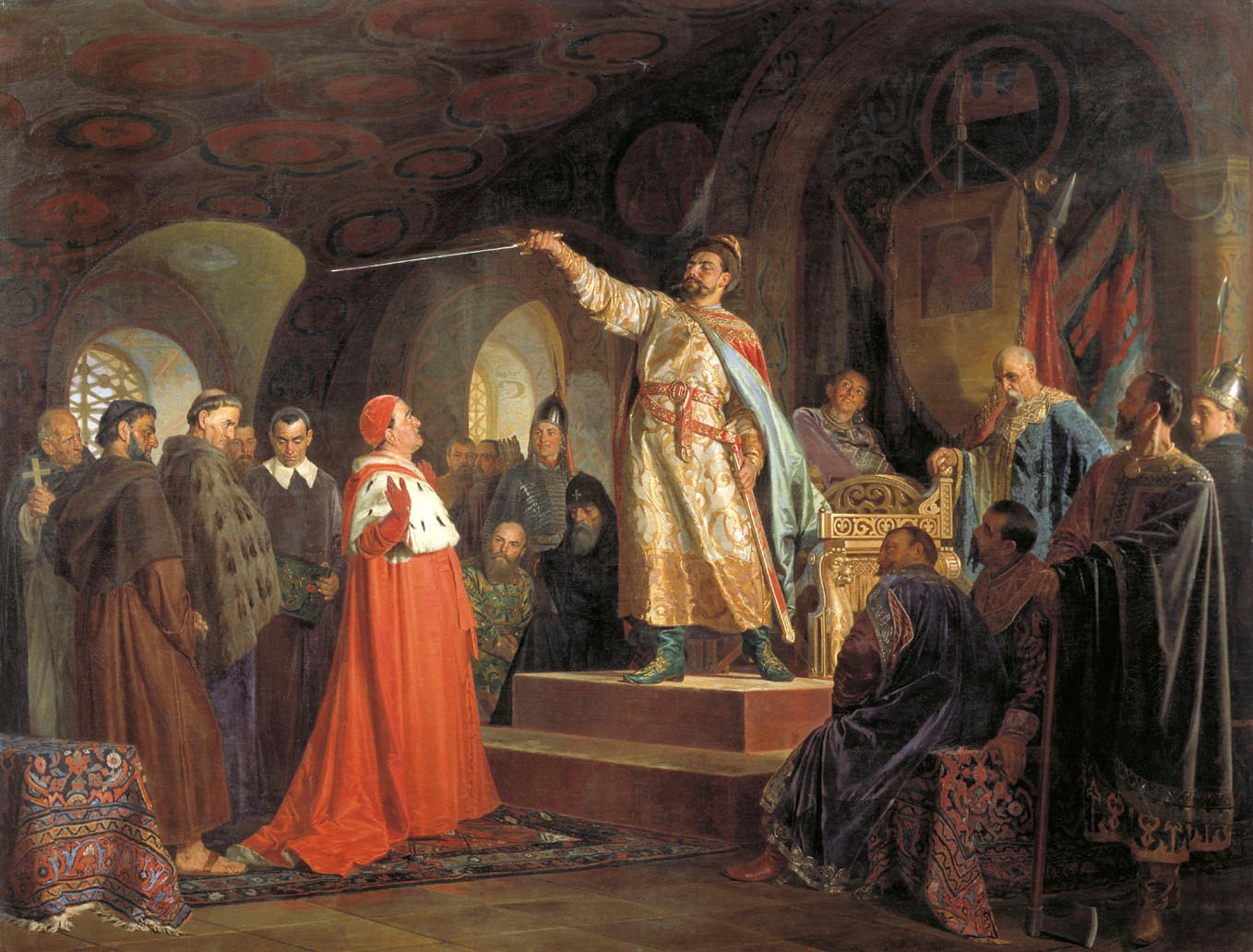 I was relaxing this morning, reading a real think-piece on yoga pants, when it occurred to me that I haven’t written anything on the Middle Ages in quite a while. It isn’t that I’ve fallen out of love with that long era in human history… it’s just that… well… yoga pants. Anyway, I resolved to write something on someone that existed during the period from 400 A.D.E to 1400 A.D.E and also to stop writing “A.D.E” until someone gives me a good reason for it…

Roman Mstislavich was born in 1152 to Mstislav II Izyaslavich, grand prince of Kiev and, by all accounts, quite a card once you got a few drinks in him; Roman’s mother was Agnes, daughter of Boleslaw the Third of Poland, known primarily for being one letter away from a side dish at a barbecue. Roman was the eldest of three sons and the only one of the three who, when pronouncing his first name, you didn’t sound as if you had a mouth full of jacks.

When he was eighteen Roman was given rule over Vladimir-in-Volhynia, when his father very thoughtfully died. Vladimir-in-Volhynia was comprised of parts of Poland, Ukraine and Belarus and has been called “the worst shit-hole in the world” by historians that have clearly never seen Amarillo, Texas. As with every new rule, Roman was expected to subdue someone, because if your nation didn’t have enemies, what would you need with a ruler? In Roman Mstislavich’s case, it was the Yotvingians… a people whose name drips with evil and apparently isn’t recognized by any spell-checker.

Well, he not only subdued them but even strapped some of them to plows to till his fields. That may SEEM drastic, but for a Slavic ruler, that actually fell within the range of kindness. And, with the Yotvingians occupied with the potato crop, Roman could concentrate on domesticity. Roman married Predslava Ryurikovna who, as far as beauty, wisdom and grace are concerned, had a very powerful father. And, Roman the Great would come to use that power in ways that most of us can only imagine safely if we aren’t operating heavy machinery. Roman Mstislavich was about to stir up some trouble.

And, where better to start than the Principality of Halych? Especially when two children of a dead ruler are fighting over who gets to sit in the big chair. Through threats and a little poisoning, Roman Mstislavich managed to gain control over Halych. So, he gave control of Vladimir-in-Volhynia to his brother, Vsevolod Mstislavich, who assured him that the decision to do so would DEFINITELY not bite him in the ass sooner than later.

Roman’s rule of Halych was uneventful, unless you count the attack by King Bela III of Hungary as an event. Bela’s original plan was to reinstate the surviving brother, Vladimir Yaroslavich, as ruler of Halych. When the Hungarians arrived, Roman bravely fled like a rabbit. Bela, as kings are wont to do, changed his plans and gave Halych to his son, Andrew, who Bela honestly felt was the best member of his immediate family to do the job.

Roman ended up back at Vladimir-in-Volhynia; however, his brother would not let him into the kingdom due to the fact that he didn’t know the secret password. Roman’s father-in-law, Rurik Ryurikovna, didn’t have the resources to put Roman back into Halych but, with a little effort, wrested Vladimir-in-Volhynia from Vsevolod. Vsevolod suddenly found religion and became a monk because THAT’S WHAT HEROES DO!!!

Meanwhile, Andrew promised the Halychiot citizens more input and freedom in the rule of that principality, which was more than enough to get him thrown out by the people and replaced with Vladimir Yaroslavich. Yaroslavich ruled Halych until his death in 1199.

In 1195, Roman’s father-in-law, Rurik, allocated some Kievian lands to his children and children-in-law and Roman didn’t do too badly. He was given four domains, including Torchesk. Torchesk was a thriving town in the Ukraine region that would later transform itself into a pile of smoking rubble, with the help of the Mongols, in just a few decades. Sadly, Vsevolod III Yuryevich was unhappy with Rurik’s allocation and felt comfortable enough with Rurik to tell him so. So, Roman had to give back the four domains and they were given to Vsevolod, who gave Torchesk to Rurik’s son. Roman was livid, although he was pretty much always livid, so no one really knew the difference. He felt that a plot was afoot.

Like most rulers at the time, when he had a problem, Roman went to Yaroslav Vsevolodivich for help. This was time consuming due to the fact that it took several hours just to write Vsevolodivich’s name. They conspired to take Kiev but, it didn’t work out. Roman was defeated and forced to apologized to his father-in-law. Rurik Ryurikovna accepted his apology and gave him the town of Polonyy as a consolation prize.

But, like hamsters and vampires who work in holy water factories, Vladimir Yaroslavich couldn’t last forever; and, upon his death in 1199, Halych was up for grabs and Roman the Great was one of the grabbiest guys out there. He made a deal with the duke of Poland for the territory became its ruler, after the inhabitants had given their opinions and were ignored.

While his testosterone was still flowing, Roman defeated the Cumans as a favor to the Byzantines. In return for his gift of battlefield violence, he was given in marriage, Anna, a Byzantine princess. Roman had repudiated his first wife. Repudiation was what historians call “a dick move” but you have to admit could come in handy sometimes.

While battling over some other territory, Roman finally got his ex-father-in-law in his clutches. And, like his father-in-law, he was merciful and sent him, his ex-mother-in-law and his ex-wife to a monastery. The three were tonsured, ordained and then tickled a bit for good measure.

But, his new position of power was tenuous. Roman had rejected a suggestion that he become Roman Catholic, because he felt he could defend himself. Ironically, he probably could have until he rejected the Pope’s offer. Suddenly, like a stray cat in a cathedral, Roman the Great was being chased by Catholics.

It was his old pal, the Duke of Poland, that finally got him; and, he was killed in battle in 1205, never having known the pleasures of an extended time of peace or a Monte Cristo sandwich…