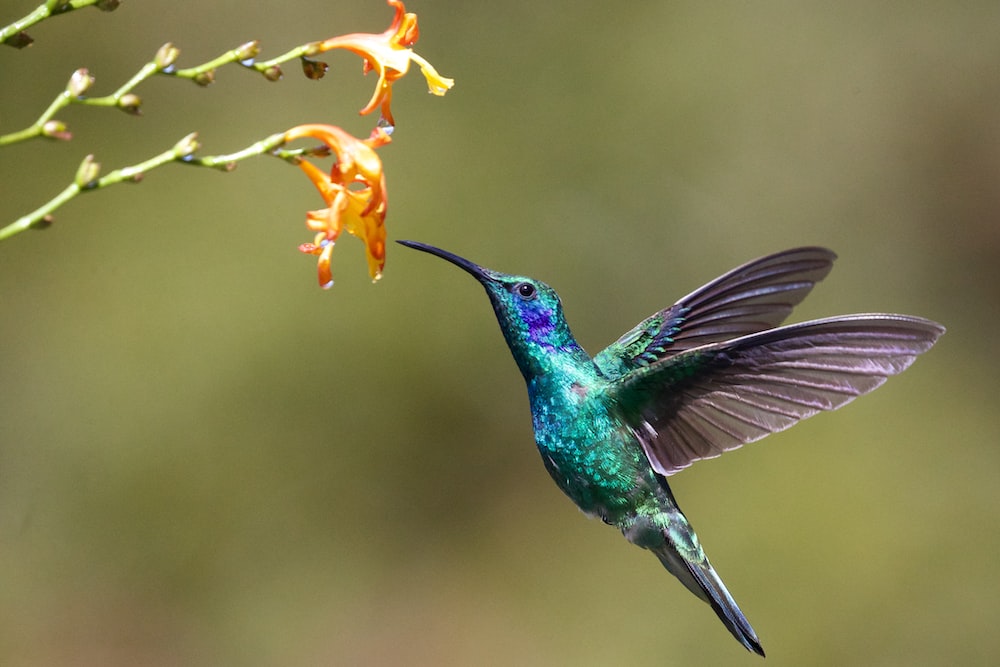 Despite its bright colors and tendency to hover in the same position as it feeds, the hummingbird remains the most difficult animal to hit with an air rifle; on the other hand, the hummingbird is the second easiest animal to dispatch with a fly swatter…the first being the fly. You might find the idea of running after and flailing away at a hummingbird to be ludicrous; however, those of us who do will keep our nectar where it belongs: In our flowers, specifically at the base of the perianth.

There are around three hundred and thirty species of hummingbird. All of these species range within North or South America. Over half of hummingbird species live in either Ecuador or Brazil. As anyone from Brazil or Ecuador will attest, there is no good reason for this. Zoologists have proven that, even with a shock-collar, most vertebrae will make at least a token attempt to flee either of the two countries. Those hummingbirds with ambition can range as far north as Canada.

On average, hummingbirds weigh about as much as a quarter; in fact, if you see what you think is a hummingbird, but it has a profile like George Washington, chances are that it is a quarter; however, if it turns out to be a hummingbird after all, you’ve got something valuable there and should break out the fly swatter. If you see what you think is a quarter, but it flies, you are probably hallucinating. I would recommend that you stop taking or start taking thorazine.

Hummingbirds typically incubate two eggs at a time. This insures that there is always a “good hummingbird” and an “evil hummingbird” in the brood. The evil hummingbird can be distinguished by his goatee. We shouldn’t be too concerned over this because there is only so much a hummingbird can do to you, good or evil. The female sits on her morally ambiguous brood for about a fortnight to 1.28 fortnights.

What comes out of these eggs? Inevitably, it is another hummingbird: A creature with a bifurcated tongue, iridescent plumage and an elongated beak. The tongue and beak have evolved to get at nectar deep within a bloom. Its bright colors and shiny feathers were developed so that the bird could enter mambo contests. The metabolic rate of the bird is very high. A hummingbird’s heart can beat at over one thousand times a minute. This is the same rate as some of the newer cut-press machines (hint: The hummingbird is the one with feathers and possibly a profile like George Washington).

It can take up to ninety hummingbirds to make a small pie; whereas, it only takes one human pastry chef to do the same thing. However, you can pay hummingbirds in sugar water.

You can use the voracious appetites of hummingbirds to attract them to your yard…not that you’d get any benefit out of it. With hundreds of them at your command, you could barely move even the lightest furniture in your home. They are useless against prowlers and are impossible to house-train. If you must have their company, however, I would recommend a feeder filled with red sugar water. It’s your funeral…