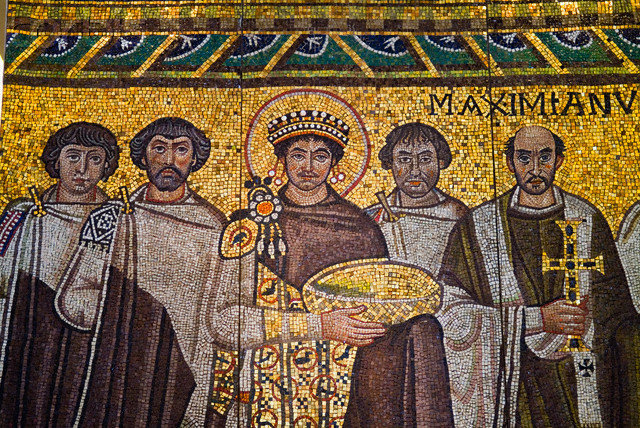 Justin I was born around 520 to a Dardanian swineherd and a swineherd’s wife, who probably wasn’t much more than a swineherd herself; either that or terrible at selecting an appropriate mate.  Not much is known about Justin’s early years.  Frankly, anyone who kept track of what a swineherd’s children were doing was probably doing so for reasons bordering on the morbid…even if the child in question was destined to become emperor of the Byzantine Empire.  The previous sentence is what you call foreshadowing…

The region of Dardani was right where Thracia and Illyria met…a great place to put a truck stop or a hot dog stand; consequently, it is unclear as to whether it was Thracian or 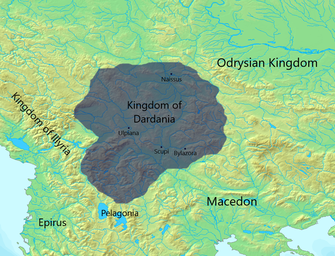 Illyrian.  The Romans had been benevolently telling its inhabitants what to do since 168 B.C.  When the Roman Empire split up, Byzantium got custody of Dardani, although Western Rome got to visit it on alternate weekends.  Dardani was firmly part of the Roman Empire when Justin was born.

Justin’s family considered themselves Thracian, which was their funereal.  Justin was illiterate when he was born and liked it so much, he remained that way until his death.  Actually, he remained that way AFTER his death, as well, but I’m not going to make any assumptions about the future.  This is an historical essay.

In his late teens, Justin fled to Constantinople during one of the many barbarian invasions of Byzantium.  He and his two companions had only a sack of bread between them; oddly enough, this sack of bread was enough to push them into the middle-class.  If they’d had butter, they’d have gone up another tax bracket.  Justin wanted to be all that he could be, so he joined the Byzantine army.

Lucky for Justin, there was a new army in town.  The emperor at the time, Leo II, noticed that, what with all the barbarian battles in the empire, soldiers in the city were as scarce as blue bulldogs at a cat show.  What if barbarians got in?  What if the people exercised their inalienable right to get mad and throw him out?  Thus was born the guards.  And, thus the native hue of resolution was sickled o’er with a pale cast of thought.

Most historians address the next forty-eight years of Justin’s life with, “he rose through the ranks”.  This is a cheap copout.  I am not averse to cheap copouts, so I will do the 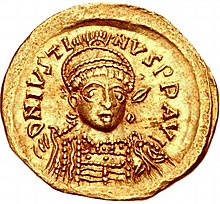 same thing.  We can deduce that Justin survived whatever battles he was in.  From his visage on coins, we can deduce that he had a head; and, we can deduce that he never took so many niacin pills that he turned orange, ‘cause SOMEBODY would have written about THAT.  Suffice it to say that he kept his nose clean, no easy feat for a former swineherd, and rose to the rank of comes excubitorum, Latin for “Count of the Royal Guards”.  One can only hope that such a job came with a special hat…

After oiling more palms than a massage instructor, Justin was elected Emperor of Byzantine.  Some say he was chosen to be a puppet of the Senate, but such people are unclear as to whether he was to be a sock-puppet or a marionette.  Others contend that his nephew, Justin, was the power behind the throne.  The nephew was originally named Flavius Petrus Sabbatius; however, emperor Justin adopted him as a son and changed his name to Justin so that they wouldn’t have to monogram any extra towels.

Well, Theodoric, king of the Ostrogoths, well known clog dancer and Aryan Christian, was angered by the edict.  So angry was he at Justin that he imprisoned Pope John I and kept him locked up for the rest of his life.  Luckily, that was only a few weeks.  Justin never withdrew his edict on Arianism; and, Theodoric learned a valuable lesson:  Popes, like giant pandas, do not flourish in captivity.

Justin also raised a few eyebrows when he repealed the law prohibiting senators from marrying lower-class women…such as actresses.  The law makes a lot of sense because, without it, Angelina Jolie would’ve already seized the presidency.  Coincidentally, Justin married a mime after the law was repealed.  He also repealed the law allowing mimes to be hunted for their pelts.  His wife, Theodora, was his co-ruler and a good woman to have on your side at charades.

In addition to ostracizing the Ostrogoths, Justin peeved the Persians.  Admittedly, it wasn’t difficult to get on the Persians’ bad side.  When you are seventy-six, you are bound to make a lot of enemies.  For some of the elderly, it is neighborhood children; for Justin, it was two of the most powerful nations in the world.  Having gotten that part of Europe just the way he liked it, he turned control over to his nephew, Justinian II and died.

Emperor Justin had a city named after him.  Unfortunately, a lot of people continued using the old name.  Hundreds of years later, the king of Armenia officially renamed it.  Oh well, sic transit gloria, which I believe is Latin for “There goes Gloria!”.

6 thoughts on “The Thracian Good Fortune of Justin I”