This is a text widget, which allows you to add text or HTML to your sidebar. You can use them to display text, links, images, HTML, or a combination of these. Edit them in the Widget section of the Customizer.
Posted on August 13, 2020August 13, 2020 by masercot

The story of Little Red Riding Hood has long been considered an textbook example of rape symbolism, Jungian death archetypes and timber wolf pornography; but, there are also connections to the tenets of Buddhism, the influx of the adolescent dreamscape and the disappearance of labor leader Jimmy Hoffa. It can be shown conclusively that the author was living out a latent oral fixation and not, as was previously hypothesized, crazy as a bedbug.

Charles Perrault published the story of Little Red Riding Hood late in the seventeenth century, possibly while high. The story was part of a collection called Mother Goose

Tales and was compiled specifically to give grad students something to write about when getting PhDs in Folklore and Legend. The original story can be traced back to tenth century Italy or, even earlier if evidence isn’t a big concern. The story is a simple one: A young girl in a red hoodie is told to bring food to her grandmother who is too frail to feed herself but apparently healthy enough to live deep in the woods half a day’s walk away from her nearest neighbor. She is told NOT to stray from the path. THIS IS IMPORTANT; because, if she’d been told to stray from the path, the story would’ve been about the importance of not listening to one’s parents. The girl meets a talking wolf who learns where the grandmother is because they apparently had addresses in the dark woods of Italy. The wolf eats the grandmother, then tricks Red Riding Hood into getting into the bed and then eats her, as well… leaving crumbs all over the comforter.

A huntsman happens to be passing by and hears the sound of chewing and screaming. He enters the grandmother’s home and sees the wolf who is not only asleep, but 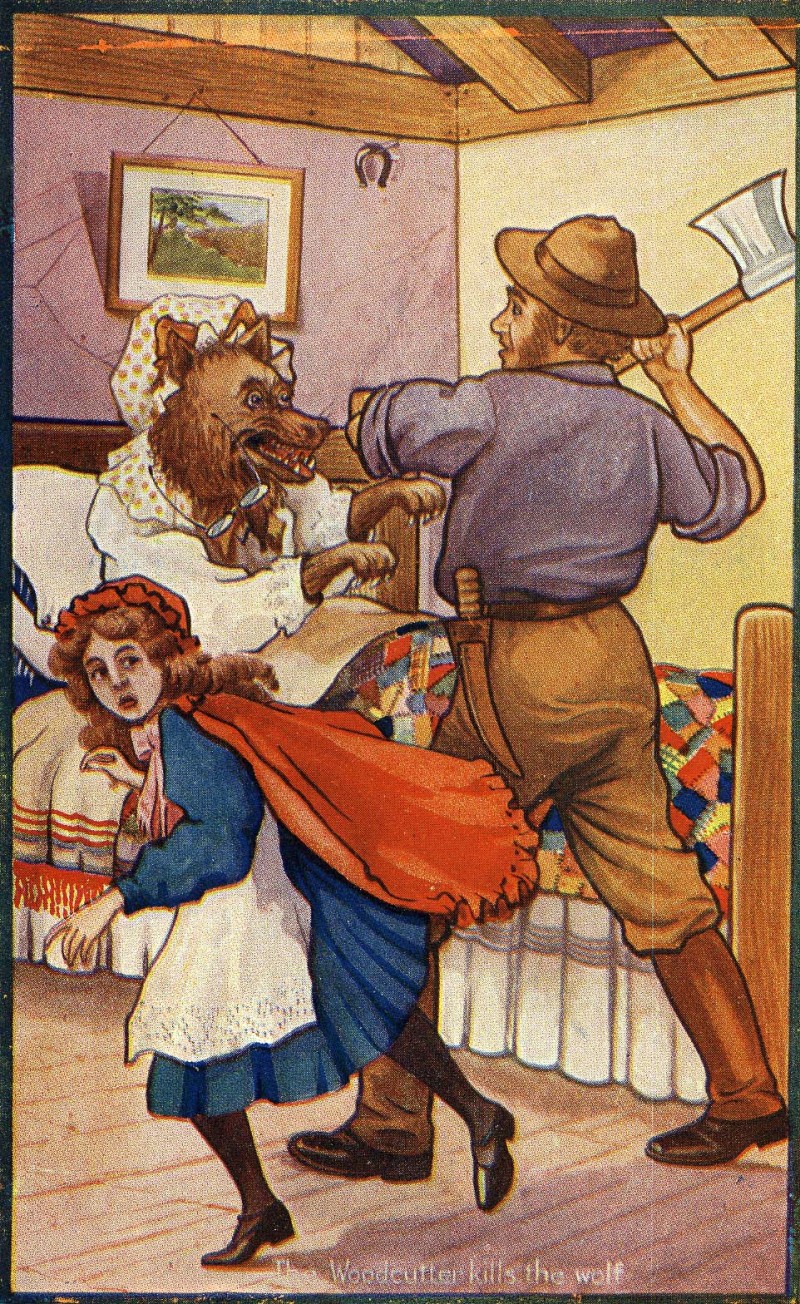 apparently in a coma; because he manages to cut open the animal and remove the grandmother and Riding Hood AND fill the wolf’s body cavity with stones without waking him. The stones finally do kill the wolf but not at Altamont.

What did Carl Jung have to say about this violent tale? Not much, I’m afraid, although we couldn’t watch him twenty-four hours a day. Each component of the story is it’s own separate symbol. Taken together, these symbols tell us of a person’s psyche, what parts of it are damaged and why it should be ashamed of itself. What would he have said about the fact that she was called, “Red Riding Hood” when she was clearly walking? Would he have told that story again about how, when he was an undergrad, Sigmund Freud made him smoke cigars until he threw up?