This is a text widget, which allows you to add text or HTML to your sidebar. You can use them to display text, links, images, HTML, or a combination of these. Edit them in the Widget section of the Customizer.
Posted on April 5, 2021 by masercot 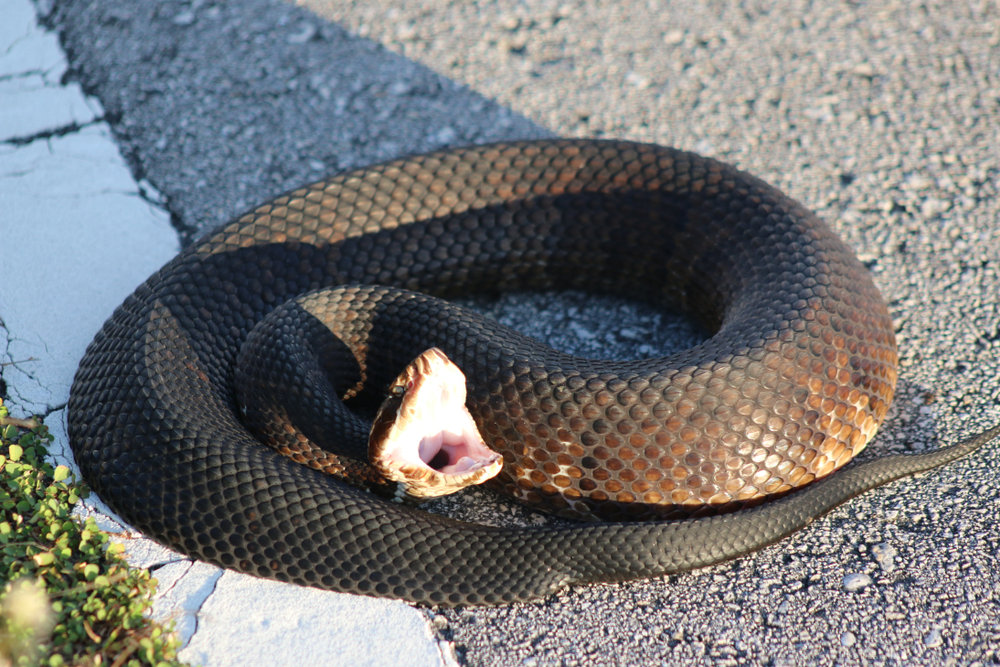 Having grown up in rural Florida, I can tell you that the threat of snake bite is ever present and hilariously undaunting. You may wonder why everyone in the state of Florida is a flat-out lunatic; well, constantly wondering if your next step is going to be your last takes a toll on your sanity over time. You climb a tree and there’s a copperhead. You walk a row of crops and there’s a coral snake. And, if you are foolish enough to swim in a Florida lake, you will eventually see a water moccasin… who will distract you just long enough for an alligator to get you.

The water moccasin (agkistrodon piscivorus) also known as the cottonmouth, water viper, pond rattler and “the levitator”. The name “moccasin” comes from the Algonquin “mockasin” which means “shoe”. Confused as to why they would name a venomous water snake after a shoe? You wouldn’t be if you’d ever seen a water moccasin laced up.

A. piscivorus is not a large snake. At three feet long, it will never be allowed on most of the roller coasters in this country. It has a triangular head which makes it a favorite of those who dabble in Euclidean Geometry… as it menaces you and your son, you can explain what a hypotenuse is and why it is trying to bite you. Water moccasins have a thick dark horizontal line extending from its eye, back. This line is used to indicate where to take the snake apart into its component pieces for easy transport. It also has a terrifying white mouth.

That’s right. When it is threatened, the water moccasin faces its foe with its mouth wide open showing a snowy-white interior. This is a threat display that says to the attacker, “Watch out! I’m a snake that’s eaten a whole bag of marshmallows. Do you want to mess with a marshmallow-eating snake?”. Marshmallow-eating snakes are considered, by most Americans, crazier and more dangerous than a biker-bar stripper. There are some predators, however, that don’t put up with the moccasins’ nonsense. Snapping turtles, alligators and eagles will eat up a moccasin, lickity split.

What do moccasins eat? Funny I should ask! Any creature you find in the water is on the menu for a cottonmouth: Frogs, fish, small mammals and other snakes. A. piscivorus is also the only viper that eats carrion. Zoologists have instances of the moccasin eating chum under the docks and even the remains of a dead hog. One wonders if the water moccasin would be less irritable if it didn’t have to contend with zoologists following them around writing down what they eat.

The bite of a water moccasin is normally not fatal or enjoyable. It sits on the continuum between “agony” and “a million laughs”… but, close enough to “agony” to read its license plate. Its venom is cytotoxic, meaning

that it destroys tissue, causing great embarrassment when its victim sneezes. The number of moccasin-related deaths are usually in the single digits but amputations are a real danger. So, if you have a hand or a foot that you’ve grown tired of, I recommend teasing a water moccasin. If you want to get stabbed in the neck with a car key, I recommend teasing a biker-bar stripper.

A. piscivorus gives birth to live young because it has places to go and marshmallows to eat. Their young are venomous from birth so I’d avoid them while they are teething. They must be doing a great job breeding because the IUCN classifies them as least concern, but that’s because they’ve never had to swim in a lake in the deep south.

18 thoughts on “The Unspecific Precociousness of the Water Moccasin”