This is a text widget, which allows you to add text or HTML to your sidebar. You can use them to display text, links, images, HTML, or a combination of these. Edit them in the Widget section of the Customizer.
Posted on May 5, 2022 by masercot Vampire bats are given a bad rap. Sure they are ugly… so ugly that you cannot help but think it is on purpose; and, they DO take blood from people and animals, while they are still using it; and, they carry rabies… which isn’t so bad but the same bats insist on also SHARING rabies. But think about the benefits we get from vampire bats. And, when you come up with something, let me know because I don’t have a clue.

Vampire bats inhabit South, Central and North America. There’s just something about the vast jungles, turgid heat and complex eco-system that makes flying rats want to drink blood. These bats have been around since the Pleistocene era and will probably be around for at least a few more weeks. All three extant species flourish in the Americas, because a LOT of things have blood in them.

But, there is an issue with only drinking blood: Besides losing popularity points with those around you, you also have to consume a LOT of blood. A lack of fat and carbohydrates mean that a vampire bat has to consume forty percent of its body weight every day. If a one hundred and eighty pound man had to live this way, he would need to consume enough blood to get to the moon and back and fill three football fields.

Vampire bats are leaf-nosed bats. That sounds kind of mean but it sure beats being called 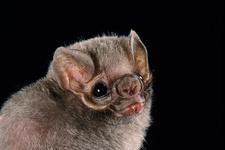 a “Wild Transcaspian Ass”. They are of the family Desmodontinae and will remain so until someone does something about it. There are seven species of vampire but four of them are extinct. This is the equivalent of me saying I had six girlfriends but five of them were imaginary.

The Common Vampire Bat (Desmodus rotundus) is prevalent throughout the top two-thirds of South America and all of Central America. At three and a half inches in length, d. rotundus is one of the few mammals that can easily be fired from a t-shirt cannon. It has the fewest teeth of any bat making it the one most like a jack-o-lantern. Unlike most bats, they move quite well on the ground as they creep up on their prey. With their incisors, they slash their victim and lap the blood that flows out. The Common Vampire Bat is polygynous; i.e. the males mate with many different females but each female mates with only one male… or as most men might call it, “what’s the catch?”.

The Hairy-Legged Vampire Bat (Diphylla ecaudata) tends to go after bird blood instead of the blood of mammals. Domesticated birds like chickens are a prime target for d. ecaudata. According to a paper published by Greenhall, Joermann and Schmidt, they tend to bite chickens on the anus. This was a surprise to Greenhall, Joermann and Schmidt and no less a surprise for the chickens. They are smaller than the Common Vampire and have smaller brains; but, they have more teeth making class picture day a much more pleasant affair. They are less likely to have rabies than a Common Vampire but far more likely to have feathers around their mouths…

The White Winged Vampire Bat (Diaemus youngi) also prefer birds but, like most of us,

won’t turn down the blood of cows if convenient. They have cup-shaped scent glands in their mouths; so, they go through a LOT of breath mints. There are nearly as large as the Common Vampire. The anterior of their tragus is hairy but the classy thing to do would be to ignore it. D. youngi spend a lot of time in Trinidad but most Trinbagonians wear a carnation so you can tell them apart.

Have we started wiping out these creepy little bastards yet? We have not. Which is odd because we can extinct animals without even trying… yet, we can’t destroy the habitats of vampire bats? Frankly, I don’t understand it. Perhaps it is because they are important to the ecology of South and Central America. Maybe, without them, chickens and cattle would have TOO MUCH blood and start exploding at random, spraying bits of meat and horrifying vegetarians everywhere.

It’s too eerie to consider. I think my problem is not that the animal might feed off of me but that it’ll never get around to finishing its meal and I’ll have to walk the world half-eaten…

22 thoughts on “The Blood-less Chicanery of the Vampire Bat”